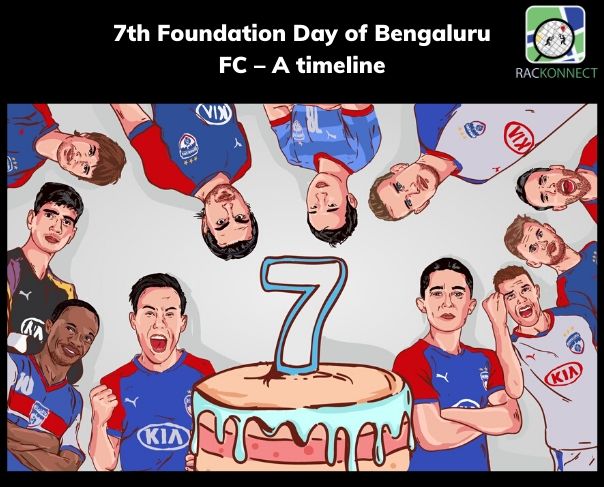 Bengaluru FC was founded by the JSW group with Parth Jindal playing a key role on 20 July 2013 and in the subsequent years the club has made its way into the nation’s elite without breaking much sweat. Bengaluru FC, today, celebrates its seventh anniversary.

But how did Parth arrive to the idea? He revealed recently.

“I remember I was upset after Arsenal lost a game when my father asked me two simple questions. He said ‘Are you from London?’ to which I replied with a ‘no.’ Then he asked me to name eleven Indian players. He pointed out that two of the first three names I picked had already retired.”

“My father and I had a conversation where we discussed the standard of Indian football, compared to elsewhere. It was then that he asked me why I wasn’t doing anything to better that. The seeds of BFC were sown.”

Everything we’ve become and want to keep becoming, will always come back to that magical evening at the BFS on this day, seven years ago. We didn’t unveil just a club, we announced a dream – one that we live every single day. To everyone and everything BFC, Happy #FoundationDay! pic.twitter.com/LL1niI0NK0

Parth continued, “It was an incredible opportunity for me as a 23-year-old. We wanted to set the bar high with Bengaluru FC and what a journey it has been!”

Ever since the club started took the pitch for the first time on 22 September 2013 against Mohun Bagan, it has been a journey no less eventful. They’ve won all trophies they’ve participated in with Indian captain and talisman Sunil Chhetri leading them from the front from day 1. The ‘Captain Leader Legend’ moniker has been celebrated equally during the national team games and BFC games.

The journey started under Ashley Westwood, former Blackburn Rovers manager who was keen on building a solid team. Thoi Singh was the first-ever signing for the club, and John Johnson and Curtis Osano the first foreigners to put pen on paper. The club lifted its first I-league title in its debut season, defeating Dempo 4-2 at the Fatorda on 21 April 2014.

They claimed their first Federation Cup title on 11 January 2015, defeating Dempo in the final 2–1. In a way, Bengaluru took on the mantle of being India’s best club from Dempo in that short span.

Titles kept coming in, and in just seven years, the club has won six major titles while also reaching the finals of the AFC Cup in 2016, a feat no other Indian club in the history has achieved.

7 incredible years – when we started this journey I for one never imagined it be so joyous. Filled with immense gratitude and pride today – the job has just started and everyone who is family here @bengalurufc is strapped in for the ride – one goal, one mission, India in FIFAWC

The team is homed at the Sree Kanteerava Stadium, and is passionately supported by the West Block Blues, their 12th man. We wish Bengaluru FC a Happy 7th Foundation Day and a lot of success in the future.

FC Barcelona: Team of the Decade