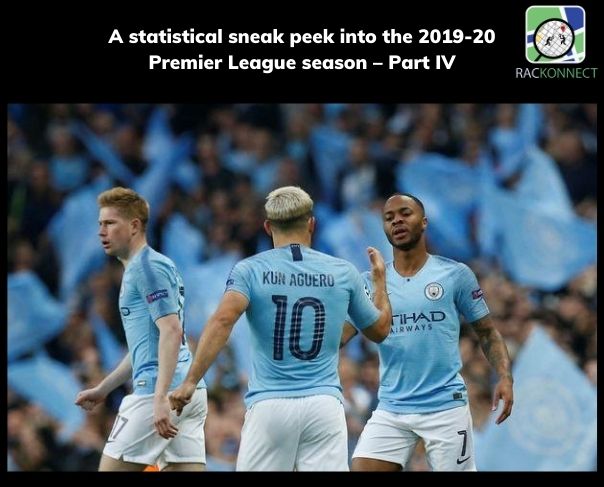 While football goes beyond just statistics, statistics is what is often used in debates and reflect to some extent a player’s effectiveness on the pitch for his side. We take an extensive look at some of the most intricate statistics in the Premier League this season.

In the fourth part of this series, we take a look at the minutes per goal scored, most big chances created and players that carried the ball for the longest distances progressively (towards the opponent’s goal).

The Argentine has been one of Premier League’s best strikers since he arrived nine summers ago and looks like he has no plans to slow down into the next season. He scored 16 goals this term with 52% shot on target.

Once regarded as the next-big thing in English football, Danny Ings’ career has been ravaged by injuries. This season, however, he came into his own, scoring 22 times with 58% shots on target.

Manchester United’s breakout star and one for the future Mason Greenwood paid well for every ounce of trust bestowed upon him by Ole Gunner Solksjaer. He scored 10 goals, with 63% accuracy – not bad for an 18-year-old.

The Golden Boot was coming for a long time, and it finally arrived for Jamie Vardy this season. For his 23 goals, Jamie took a total of 71 shots, with 61% accuracy. He’s clearly aging like fine wine.

Is he an inside forward or a proper striker? Only Sterling and Pep Guardiola know. But both certainly know how to make him tick. For his 20 goals, he took 68 shots at a rate of 56%. He will only get better from here.

There’s no doubt that this table was to be led by him. Kevin De Bruyne, for many, is the best Premier League player and for some, is one of the best in the world as well. With such finesse about his passing, he’s set to have a same effect on Manchester City for years.

For a full-back to come second on this list shows how Trent Alexander Arnold has helped Liverpool win the league. He also has the highest number of assists for the PL champions, certainly a rarity.

Pep Guardiola has a large squad at the Etihad, but he knows the ability of each player intricately. Mahrez, who has played most off the bench this season, was always quick to respond to his manager’s call. No shock here.

He wasn’t staying far behind, was he? His partner-in-crime, TAA, sits on second on this list and Robertson has his healthy number at 14. Is this full-back duo the best in the world of all time?

The Everton playmaker might not have had the best seasons per his standards, but he was certainly up there in the top creators for his team. Richarlison will bounce back – he has far too much talent to lay low.

Aston Villa deserved to stay in the Premier League even more for Jack Grealish. An Aston Villa ambassador, the captain plays for the club with his heart on his sleeve and has the maximum progressive distance.

Crystal Palace came 14th on the league table, and Zaha’s efforts shouldn’t go unnoticed. He has worked tremendously hard, and the next season could be his if he could work on his decision-making.

The Wolves winger is set to become one of the most-sought after players in the transfer window, and this statistic is going to help him raise that fee a little bit more. Traore is a constant threat and a very able dribbler who beats defenders with speed.

A centre-back, Harry Maguire’s impact on Manchester United is unquestioned. He’s been their talisman at the back, winning tackles and headers while also carrying the ball forward. A centre-back who passes well is a treat for any manager.

Pep Guardiola has a habit of turning defensive midfielders into centre-backs, and here we have another one in Fernandinho. The Brazilian has calmly slotted in, and has carried the ball ahead for the longest distance for City.