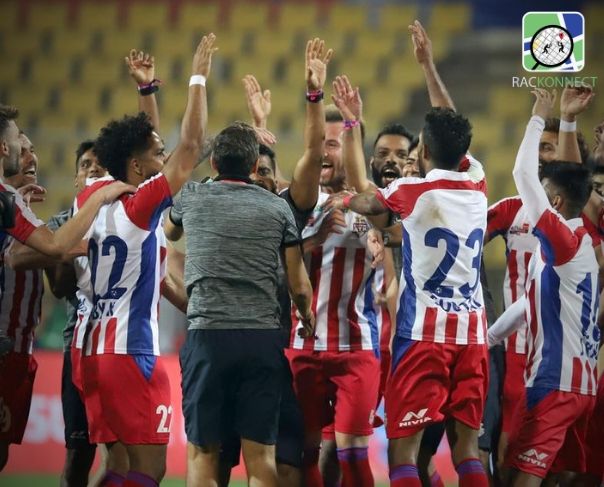 Sourav Ganguly’s ATK have won their third Indian Super League title and they did that in style. The Red-and-Whites scored three times and were dominant throughout against Chennaiyin FC. The Antonio Lopez Habas-coached side played a defined style and were content giving the possession to Chennaiyin, who would be deemed unlucky by many.

The Marina Machans, who had qualified for the finals after a breath-taking comeback in the group stages, started on the front foot and controlled proceedings. Against the flow of the game, Javi Hernandez scored his first-ever ISL goal to bring a sense of calm in the ATK ranks in the 10th minute. He was helped by the imperious and persistent running of Roy Krishna, and a moment of sensibility from David Williams.

Chennaiyin did not back out of the contest and kept going. It just wasn’t the day for both Rafael Crivellaro and Nerijus Valskis, their best-attacking players so far this season. Both came close to scoring on a number of occasions, but some good blocking from ATK defenders and good goalkeeping from Arindam Bhattacharya continued to defy them for the entirety of the game.

At the start of the second 45, stylish playmaker Edu Garcia made things worse for Owen Coyle’s men. Played through by a smart David Williams pass, he found the left bottom-corner of Vishal Kaith’s goal to make it 2-0 to further strengthen ATK’s belief. Chennaiyin continued to attack incessantly and were ruthless, but to no real result. In the 69th minute, however, a ball fell kindly for Valskis in the box, and he did well to get the right connection to slot it in the top right corner of the net. Game on!

For the next 15-odd minutes, Chennaiyin held the game well. Controlled by Anirudh Thapa from the midfield, the forward line continued to string passes, but could not produce anything fruitful. At the very end, Javi Hernandez scored another from a delightful pass from Pronay Halder, making it 3-1 and bringing the curtains on Chennaiyin’s hopes for a comeback.

The scoreline is completely opposite of the stats, but that clearly shows ATK had a gameplan. This game reminds of Inter vs Barcelona in the 2010 Champions League semi-final, when the Jose Mourinho coached side gave away possession and yet, happily cruised to a 2-0 victory.

Chennaiyin had 18 shots to ATK’s 12, but just 6 were on target to ATK’s 5. Possession, however, had a long bridge. The losing side controlled 69% of the ball and stringed 521 passes together, with an accuracy of 80%. ATK, on the contrary, had a meager 251 passes with 59% accuracy, but in the end, it’s just the goals that matter.

With ATK’s merger with Mohun Bagan set to happen in the season break, it is a happy swansong for the team that won the ISL in its first season with Lopez Habas at the helm and ended with him as well. ATK will get the AFC Cup play-off spot next season, and if they hold onto their players, the team looks set to have a strong run at the continental level. For now, they deserve their bottle of champagne.

What impact would the cancellation of Tokyo Olympics bring on Japan's economy?

NEED FOR SPEED IN FOOTBALL