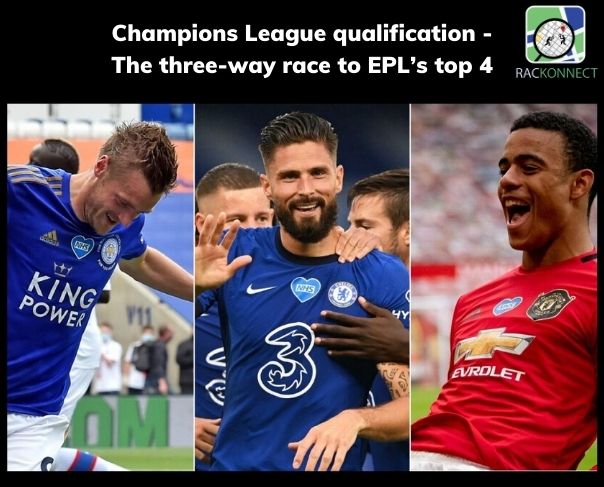 Leicester City, Chelsea and Manchester United have been locking horns to fight for the two remaining places in the top four of the Premier League that guarantees a spot in the Champions League in the subsequent season. The top two spots have already been confirmed by Liverpool (title winners) and Manchester City.

Manchester City’s two-year European ban has been overturned by the Court of Arbitration of Sport and that means the Blue side of Manchester will play in the continental championship next year, further tightening the already-deadlocked three-way struggle between the followers.

Chelsea, currently in third place, have only a point more than both Leicester and United. Chelsea and United have a game each in hand, having played their FA Cup fixture at the weekend. Liverpool host Chelsea at Anfield, and United host West Ham United at Old Trafford. Meanwhile, Leicester have lost their extra fixture 3-0 to Tottenham, giving the Red Devils a massive opportunity to move to fourth if they win.

If Chelsea lose and United win, Ole Gunner Solksjaer side will move to third, with just one game to play. The Red Devils travel to Leicester in the last game week, making the permutation even more interesting. The battle is set to go down to the wire as both clubs would give it their all to make it to the last four and book their ticket to European top-flight.

United, in particular, have been in scintillating form since the restart. They have lost just once, in the FA Cup semi-final against Chelsea, and are yet to play a game without scoring. If Chelsea lose at Liverpool, Leicester would breathe a sigh of relief as it will keep them in the hunt with even a draw going into the last round.

The final day could prove vital. Chelsea play host to Wolves while Leicester host United – the winner could grab the final spot as both have a goal difference of 28 currently. Wolves and Tottenham look likely to assure their spots in the Europa League, keenly followed by Premier League dark horses Sheffield United, who will push their luck to cross the line.

Wolves stand a point ahead on Tottenham on the sixth spot, with Jose Mourinho’s side on seventh with 58 points. Sheffield stand next with 54 points, followed by Burnley who only trail on goal difference. Arsenal, on 10th, have 53 points and would hope a few results go in their favour and they win against Aston Villa and Watford.

Football fans can expect a rollicking gameweek ahead with at least 5 sides fighting for the best possible stage.

I M Vijayan: The Hero of Indian Football