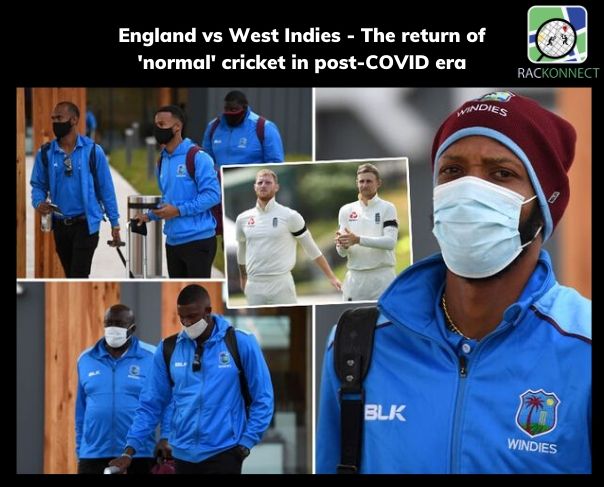 Cricket fans, take a sigh of relief as your favourite sport makes a comeback after the outbreak of novel Coronavirus hindered all activities round the globe. If you think cricket hasn’t changed one bit, think again!

England take on West Indies at home that starts Wednesday (today) in the first test match of the series to be played at Ageas Bowl in Southampton. The test, and the following two to be played in Manchester later this month, will take place sans spectators in a bio-secure environment. The England and Wales Cricket Board (ECB) has issued a list of do’s and don’ts in a 74-page booklet that has been sent to Southampton.

Only the captains, Ben Stokes and Jason Holder will go out for the toss with match referee Chris Broad according to the booklet. There will be no cameras at the toss, and no handshakes after. Umpires Richard Illingworth and Richard Kettleborough will carry their own bails, and play will be stopped at regular intervals for cleaning breaks and for sanitizing stumps.

Yes, you read that right. There will be breaks for sanitizing stumps. Not just that, reserve players will do the job of ball boys, and photographers, a select few, will cover matches draped in PPE kits.

The onfield players, too, will be affected by the regulations. They’ve been ‘asked’ not to share gloves, shirts, water bottles, bags, or sweaters. The ground staff won’t go within 20 metres of the players on the field. Off it, the social distancing rule of two square metres will have to be adhered to.

Scorers, a tradition in cricket even at the highest level, will not share pens or pencils. Accredited personnel will be tracked through a chip-enabled Covid tracker card. The International Cricket Council (ICC)’s ban on usage of saliva is being imposed — after two warnings, a five-run penalty will be forced upon the defaulting side.

“If the ball goes into the stands for six then squad players wearing gloves will throw it back. Nobody else is allowed to touch it,” The Daily Telegraph quoted ECB events director Steve Elworthy as saying. “The Test match is going to feel very different for them, but they have been living this for a while already,” he said.

“Staging these matches will help to protect vital revenue streams for our game from broadcast deals and will also give a morale boost to cricket fans everywhere, and I’m delighted that we have found a way of doing this in an environment that will be safe and secure for all involved,” Ageas Bowl chief executive David Mann was quoted as saying by the ground’s website.

For journalists covering the match, the ECB has said in an advisory: “On arrival follow the signs for medical screening and once through you’ll walk through a thermal scanner and collect accreditation. Please enter via west gate where you’ll be thermal screened again and accreditation will be scanned. PPE is provided in both spaces (respective areas for reporters and photographers).”

At 3.30 pm IST on Wednesday, the world will see what could well be the beginning of cricket’s new normal. But is it really normal?