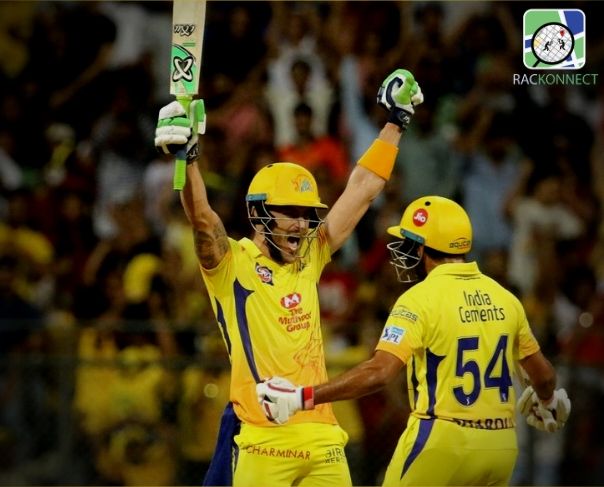 South African batsman and former captain Francois du Plessis is one of the stalwarts of the Chennai Super Kings’ talented line-up. Playing for the team since 2011 and returning after they made a comeback post a ban of 2 years, Du Plessis has played as an opener, at No.3, in the middle-order and also as at No. 5 and No. 6. To several fans in International cricket, he’s as gritty a batsman as they come.

He has been part of the incomparable success of CSK, with some memorable innings over the years. The 35-year-old, though, credits MS Dhoni for most of it. “A great thing that CSK has done over the years, and that’s credit to MS and (Stephen) Fleming the coach, is they have targeted captains – (Brendon) McCullum, myself, (Dwayne) Bravo, obviously MS, (Suresh) Raina’s captained a bit – because they want thinking cricketers.”

An ageing side is usually termed ‘weak’ for T20 cricket, but not in CSK’s case. The Lions are the most successful team in the Indian Premier League, having qualified for the playoffs in all their 10 seasons. CSK have also played 10 finals, winning three.

“So, there’s a lot of leaders within group, that experience of thinking cricketers is what they want and obviously it has proven to be very successful. Chennai Super Kings is a great franchise to be a part of. MS has got such strong leadership. He leaves a massive hole when he’s not on the field,” the former South Africa skipper waxed eloquent about Dhoni.

Talking about fielding and his passion for it, Du Plessis continues. “I love going to positions on the field where the ball goes all the time. We are lucky at CSK that we got a few very good fielders.”

Heaping praise on Ravindra Jadeja and his fielding, the Pretoria-born batsman said, “Jaddu (Ravindra Jadeja) is incredible, he has got the strongest arm in world cricket. Jaddu wants them (opposition batsmen) to try and run. He jogs to the ball because he knows if you run, you are out,” he added.

Du Plessis also recollected his match-winning 67 off 42 balls in the first qualifier against Sunrisers Hyderabad in 2018 that took CSK to a victory. CSK went on to lift the trophy that season, with the South African playing a key role.

The 2020 IPL season was scheduled to begin on March 29, but has been indefinitely put off because of the coronavirus pandemic. It was initially postponed till April 15, but was later postponed indefinitely.

“The IPL, both for players and fans around the world, has become an integral part of the season. I was really looking forward to it this year,” the long-time CSK servant signed off.

Badminton: The impotence of Women's doubles in India

England's all time record goal-scorer Wayne Rooney: 'I was not a natural goal-scorer'

The art of bowling – How to control where to bowl