The Indian contingent bounced back strongly with a 3-0 win against Uzbekistan, in the Asia/Oceanic Group I campaign, in Dubai. In their first match, the team faced a 0-3 sorrowful defeat in the hands of the Chinese team but made a strong comeback in their second match.

Like the first match, Rutuja Bhosale and Ankita Raina were entrusted with the singles matches, while the doubles pair comprised of Sowjanya Bavisetti and Riya Bhatia. 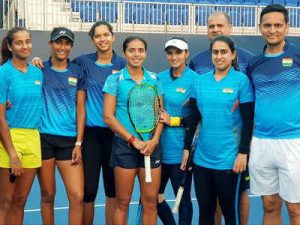 In the first singles, Rutuja faced Akgul Amanmuradova, who is 35 places above her, at 398 in the world. It was a gruelling three-hour-long match, in which Rutuja emerged from one set down to eventually win the match 2-6, 6-2, 7-5, earning the first win for India.

27-year-old Ankita Raina bounced back from her last defeat against Qiang Wang of China and won in straight sets 7-5, 6-1 against Sabina Sharapova in 1 hour and 34 minutes, to seal the tie in India’s favor, leading 2-0.  It was the sixth meeting between them and Ankita winning only the second time.

In the first set, after trading breaks twice, Sharapova began with a double fault and Ankita used this opportunity to put pressure on her opponent. She finally converted her third set point in her favor.  The second set was a comfortable win with Ankita leading 4-1 with a double break.

The Indian team’s will power and determination to win was also seen in the third and final rubber of the tie. The Indian pair successfully won 6-3,6-1 against Karimjanova Yasmia and Normurodova Setam to blank Uzbekistan 3-0. This was a much-needed win to boost up the confidence of the Indian players.

India will take on Korea in their next match. Chinese Taipei and Indonesia are the other two teams remaining to face India in the competition. The top two teams in the six-team competition will qualify for the playoffs to be held in April this year.

Fed Cup 2020: India lose 0-3 to China in their first match, next they play against Uzbekistan

How to play a good drop shot in Tennis