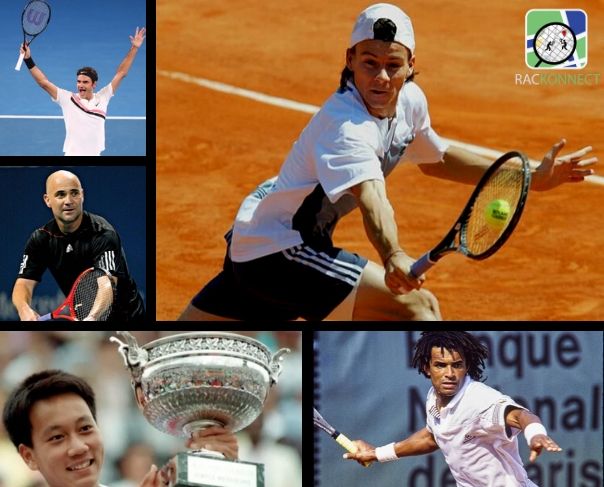 The French Open is one of the most demanding tennis tournaments in the world. It is tough to choose the top five men’s final from the last fifty years. We missed a few. But, here goes the list.

Yanic Noah entered into the final after defeating fellow countryman Christophe Roger-Vaselin in the semifinals. He was in red hot form. He had already defeated the talented third seed, Ivan Lendl. The whole nation was waiting for the first male GS champion since 1946. Yuon Petra won Wimbledon then. But his task was not easy. Sweden was reining ‘The Rolland Garros’. Noah faced the defending Champion Mats Wilander. From 1978-1981, ‘iceberg’ Bjorn Borg had won the tournament. Everyone was hoping for a close finish. Noah answered all the questions. When the return of Wilender went wide, the whole stadium erupted with joy. Noah ended the long wait of France. 6-2, 7-5, 7-6 was the final score to corner glory. The wild celebration started in the whole of France. Later, the son of Cameroon’s father and French mother turned towards Pop music. France is still waiting for its next Grand slam champion.

2. Chang’s arrival at the scene 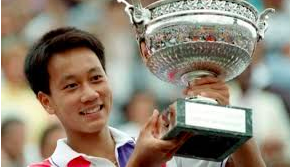 In 1989, a 17-year-old American’s journey caught the attention of the world. His name was Micheal Chang. His 4th round win from 2 sets down against Ivan Lendl is regarded as one of the best matches of tennis history. He did not stop. He was the 15th seed for the championship. Son of Chinese lineage met Stefan Edberg in the title clash. Chang took the first set easily, 6-1. Swede took control and won the next two 6-3, 6-4. Chang put up a brave fight in the next two. Both sets went in his favour 6-4, 6-2. He became the world’s youngest Grand slam champion. This remained Edberg’s only entry into the final in Paris. On a lighter note, he thanked his coach. Chang could not lift another Grand Slam trophy but the world of tennis still remembers this moment. 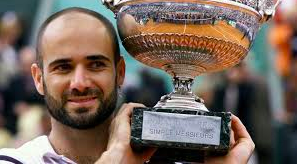 In 1998, Andre Agassi dropped out of the top 100 due to reasons other than tennis. A broken man mustered courage and returned on the scene from the Challenger tournaments. He had one of the best returns of serve in history. Ironically, he could not win the French open before 1998. The fine baseline player reached his third final at the Rolland Garros. Broken Agassi began at a slow pace. He lost the first two sets to Andrei Medvedev. The Russian won easily 6-1, 6-2. The US player was under enormous pressure. He overcame anxiety and roared back into the match. He played tennis of the highest quality. Completing his comeback trial, he went on to win the next three sets 6-4, 6-3, 6-4. Emotional Agassi received the trophy from legend, Rod Laver. He had broken the clay jinx. Paris produced the moment that we will never forget.

4. Most remarkable comeback by Gaston Gaudio

2004 witnessed its first all Argentine final between Gaston Gaudio and Guillermo Coria. Unseeded Gaudio was in terrific form. He had already conquered big names like Guillermo Canas, Jiri Novak, Tomas Enquist, Lleyton Hewitt, and David Nalbandian. In the finals, Coria played faultless tennis in the first two sets. The scoreline read 6-0, 6-3. Gaudio appeared almost defeated when Coria was 40-0 up in the third set at 4-4. At that juncture, Gaudio broke back. He took set 6-4. It charged him. In the next set, he won 6-1. In the decider, the match crossed the barrier of 6-6. Later, with 8-6, a very thrilled Gaudio fulfilled his wish. Rolland Garros has never seen such a comeback in the finals before, or even after for that matter.

5. Federer completed his career slam in 2009 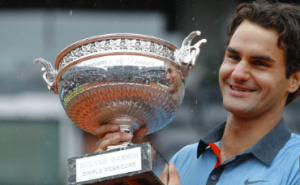 Widely regarded as the best man in history, Roger Federer has never won the French Open. In 2006, 2007 and 2008, the Swiss great has lost summit clashes to his familiar foe, Rafael Nadal. Robin Soderling of Sweden had beaten Nadal in the 4th round. 2nd seed Federer had his best chance to complete a career slam. He never came under pressure. When returning forehand of Swede caught the net, he covered his face to hide tears. This time, he crossed the line. It remained his only success in the French Open. Agassi handed him the silverware that he had yearned for so long.

Just starting Tennis? Here are tips you need to know!

How to mix up your serve in Tennis