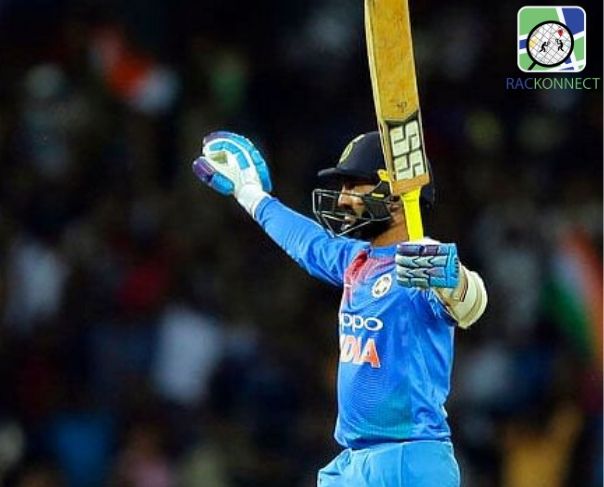 Probably one of India’s most underrated finishers in limited-overs cricket, Dinesh Karthik turns 35 today. For most of his career, he has been under the shadow of MS Dhoni. But it was the Champions Trophy of 2013 that proved to be a game-changer in his career. He proved to everyone that he was good enough to be included in the playing eleven as a pure batsman. Ever since, he has been in and out of the Indian team. But there was a particular innings that had nailed his place as a finisher in the shortest format for India and that innings came in the final of the Nidahas Trophy.

India faced Bangladesh in the final and it promised to be a cracker of a game. Bangladesh batted first and with the help of a fine knock of 77 off 50 balls by Soumya Sarkar, they were able to post a competitive score of 166-8 in their 20 overs. Runs on the board in a final always bring added pressure and India had to get off to a good start. Skipper Rohit Sharma flew out of the blocks and gave India a flying start but wickets of Shikhar Dhawan and Suresh Raina stalled the scoring process. Rohit kept one end of the wicket intact and brought about an important half-century. KL Rahul and Manish Pandey got off to starts but were not able to hang in there and build a huge partnership.

After the loss of four wickets, everyone expected Dinesh Karthik to walk out. But instead, Vijay Shankar was sent out to bat ahead of Karthik to the surprise of everyone, even Karthik himself. Shankar was struggling to get the ball away and that mounted even more pressure on India. Rohit’s wicket didn’t help either as Dinesh Karthik walked out to bat with India needing 34 runs off the last two overs to win the Nidahas Trophy.

However, Rohit believed in Karthik’s ability to hit the ball a long way and Karthik did not disappoint. He scored 16 runs off the first three balls that he faced, smashing Rubel Hossain to two sixes and a boundary. He scored six more runs off the next three balls to make it 12 runs required off the last over. Soumya Sarkar was handed the responsibility to bowl the final over and although he got hit for a boundary by Shankar, he kept things fairly tight and also got Shankar’s wicket off the second last ball, leaving India needing 5 runs off the last ball to win. Karthik backed himself to clear the boundary and launched the last ball over the covers for a six, handing India a thrilling win and establishing himself as one of India’s reliable finishers in the absence of MS Dhoni. He scored 29 off just 8 balls including 2 fours and 3 sixes at an astonishing strike rate of 362.50.

Karthik has not played for India ever since the heartbreaking loss in the semifinal of the 2019 World Cup against New Zealand. But somewhere, he still believes that he has the ability to finish games for India and he remembers the Nidahas Trophy Final innings to motivate himself to one day play for India again.

3 scandals that shocked the cricketing world

New Zealand vs India 2020: Ajinkya Rahane backs batsmen to do well in Christchurch

Is Rohit Sharma a better captain than Virat Kohli?