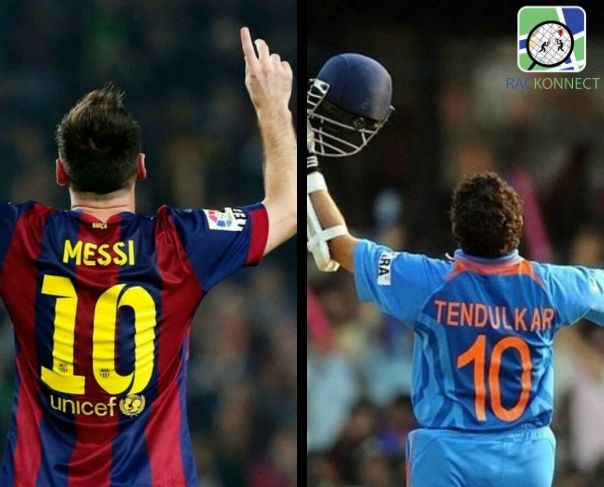 Sachin Tendulkar is to cricket what Leo Messi is the football, more or less. Both are legends of the game beyond fan bases, beyond generations and beyond time. What they have achieved will not just inspire several lines of future sportsmen, but their flair and the class with which they go about their game is a notch above the rest.

The Indian batsman caresses the ball through the covers exactly like Messi places it in the right bottom corner of the goal – with immaculate and incomparable finesse and control. Their talent was recognized early on, and both made their debuts to the centre-stage pretty early. Both are synonymous to success and No. 10 on their backs, and are idolized in their respective countries.

As the world stands still due to the COVID-19 pandemic, sportspersons are going online to talk to journalists, fans and co-sportspersons. Indian cricketer and 2011 World Cup winner Suresh Raina, in one such interview with Khaleej Times, revealed that he was a massive fan of the Argentine footballer and went on to compare him with his former teammate.

He said that they have maintained their modesty even after staying on the top for so many years consistently.

“I am a big fan of Messi. He is so down to earth, Both Sachin and Messi are very good when it comes to taking care of people around them because in sports you need to be really humble,” said the Uttar Pradesh-born cricketer. Raina was part of the cricketer team alongside for seven years, making his debut in 2005 and went on to continue after 2012, when Sachin hanged his boots from the shorter version of the game.

“You may be the number one player in the world, but your legacy is very important, You need to show gratitude to everyone,” Raina added.

He also said that Sachin, the senior-most player during the 2011 World Cup, guided the Indian team like a second coach. MS Dhoni-led India had defeated Sri Lanka in the final to script history and were crowned as World Champions after a long wait of 28 years. Raina had played several key roles in India’s journey to the finals.

“With Sachin, it’s always about his calmness. It was because of Sachin that we won the World Cup. He was the guy who made everyone in the team believe that we can do that, He was like the second coach in the team,” Raina concluded.