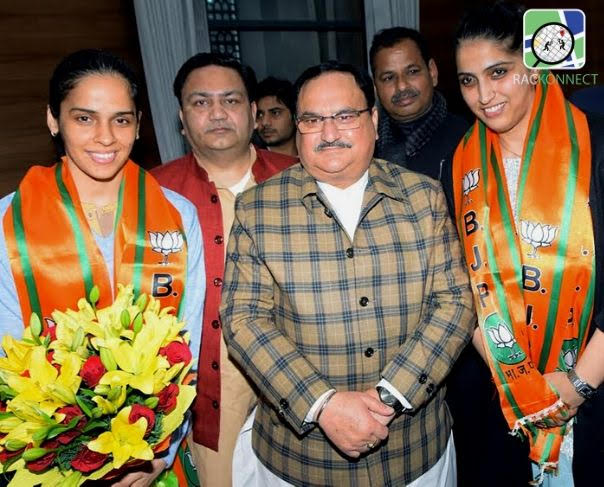 On January 29, ace Indian shuttler Saina Nehwal joined the Bharatiya Janata Party at the political outfit’s headquarters in New Delhi. She and her elder sister Chandranshu, who joined as well, were formally inducted in the party in presence of Member of Parliament from Rajya Sabha and National General Secretary Arun Singh. Nehwal hailed Prime Minister Narendra Modi as an inspiration with his hard work for the country.

Saina is a celebrated badminton player, and one of the most revered in the country. She has won 24 titles for the nation internationally, winning the bronze at the 2012 Olympics. A former World No. 1 and a gold medallist at the Commonwealth Games, Saina has also been conferred the Rajiv Gandhi Khel Ratna Award and the Padma Shri in the past, one of India’s top honors.

Saina’s political journey was expected to begin during Delhi elections, but it didn’t. With her massive following, many political pundits believed she’d campaign during the Delhi Vidhan Sabha polls to woo the youth, which did not happen. This move, trying to blend it with the ruling elite, is not new and has been done by several sportspersons in India in the past.

At 29, she’s won most accolades in the sport and is nearing the tail end of her career. This looks like a logical move to now move on to greener pastures. Public life is different from professional life and girl from Haryana would learn that on this journey. This route has been taken by a lot of sporting greats, including Vijender Singh most recently, who fought from South Delhi in the Lok Sabha elections for Congress.

This is one move that keeps most sportspersons in the limelight, and Rajyavardhan Singh Rathore has proven that by making the right moves, they can reach the top as well. Her association with her grassroots will define her political mileage and she could emerge as a key figure in Haryana.

The move may be shocking, but isn’t an uncalled for entirely. She’s a celebrity with a cult following and can serve Indian sports as the country pitches for a stronger show at Olympics. With more players joining in at the organizational level, the funding at the grassroots level could also see a major push. She’s won laurels in a walk of life and now has to win in an entirely different one. It would be interesting to see how she dodges the drop-shots and sends in the smashes in this court.