Home > Football > IS THE PRESENT LIVERPOOL TEAM THE BEST IN HISTORY?

Liverpool was founded in 1892. Like most clubs, they were the products of industrial communities. They are the most successful English club in European Completions.

If we turn pages of history, then 32 years were their Golden years. In that span, Bill Shankly, Bob Paisley, Joe Fagan, and Kenny Dalglish were the persons in charge. The Reds lifted 11 Division One titles and annexed four of their six European Cups. They were the club one aspired to be. The team was simply an unstoppable winning machine. In those years, they struck the purple patch.

Their fifth European success came in 2005. Years of lackluster performances followed. In 2009-10 seasons, they finished seventh. 2010-11 led them to the edge of bankruptcy. The fall continued, and in 2011-12, they plunged to eighth. With recovery, Brandan Rodgers finished at the runners up spot position after ‘Gerrard slip’.

Klopp’s era followed. He took some time to settle into the English weather. Patience bore fruits. In the previous season, they amassed 97 points. The squad lost just one game. On course, they set the record to collect maximum points as the runner up. They appeared in two successive Champions League finals. In 2019, in the all English final, they lifted the cup for 6th time.

In EPL 2019-20, Reds have dropped only 2 points in 20 games so far. 49 times they have hit the target. The goal difference is +35. The gap over second-place Leicester was 13 points. Manchester City is a point adrift to Foxes. They had turned the fate of the most competitive league in their favor. 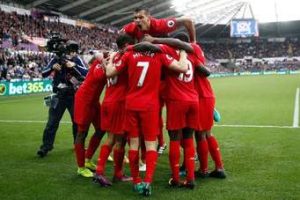 The current Liverpool domination has opened up the debate again. Is this the best Liverpool team? Divided opinions are emerging. They have also set a new club record by winning 37 games without a defeat in the league. In the previous two seasons, they have displayed unparalleled threatening consistency. The battalion is showing no weak links. Smart purchases, one of the best Goalkeepers of the world, strong defense, creative midfield, threatening strikers, and a dynamic coach have combined well. All have shaped an invincible squad. All the members of the unit have spent lots of time together. A telepathic understanding can be seen on the pitch.

They are on the way of ending the 30-year long wait for a Premier League title. Many EPL records are on the line. In the Champions League, they are among favorites’. They are alive in the FA Cup. A treble is a real possibility. ‘You’ll never Walk Alone’ continues to inspire players in the most electrifying atmosphere of the world. Are they the best? Well, they are quite close to settling the issue. Till then, the debate is open.

Blast from the past: 2006 FIFA WORLD CUP SEMI-FINALS