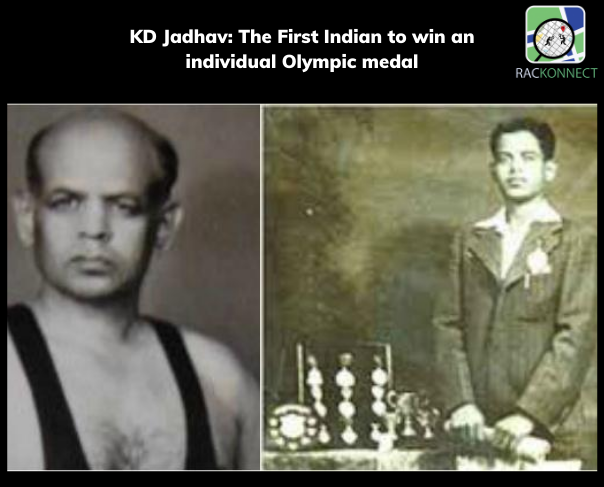 Khashaba Babasaheb Jadhav was the first athlete from Independent India to win an Olympic medal in an individual sport. He won a bronze medal in Wrestling in 1952 at the Helsinki Summer Olympics.

Jadhav’s journey to the Olympic bronze medal was far from a smooth ride. Born on 15 January 1956 in Satara, Maharashtra, Jadhav was the youngest of five sons of a renowned wrestler, Dadasahed Jadhav. He was raised in a family that lived and breathed wrestling. Initially, KD Jadhav trained under his father and was introduced to the sport when he was just five years old. During college, he was mentored by Baburao Balawde and Belapuri Guruji.

In 1948, while he was in college, he stunned many as he knocked down the bulkiest of players at the Annual Sports meet. His slight build made his opponents underestimate him and he worked to increase his power and strength.

Jadhav won multiple state and national titles and after he won the event at Raja Ram college, the Maharaja of Kolhapur was impressed with his performance and funded his trip to the 1948 London Olympics. This was his maiden Olympic appearance and during his stay in London, he was trained by Rees Gardner, a former lightweight World champion from the United States.

Though he practiced all this while on mud, Jadhav finished sixth in the free weight category which was an impressive feat as it was the first time he got a taste of playing on a wrestling mat. However, he was not satisfied with the performance and rank and began to train meticulously to earn a medal at the Olympics.

Jadhav was initially not picked for the 1952 Helsinki Olympics even though he had beaten the National Flyweight Champion, Niranjan Das. He then wrote to the Maharaja of Patiala who arranged the third match between them. It took hardly any time for Jadhav to defeat Das. However, there was no one to fund his dream.

The 27-year-old managed to collect money by running to every asking for money house in his village and the highest contribution came from his principal who mortgaged his house and gave him 7000 rupees.

At the Olympics, he defeated the wrestlers from Canada, Mexico, and Germany, and won the bronze medal on 23 July 1952 thereby creating history. When he returned people celebrated the victory and the journey from the train station to his home which takes 15 minutes took 7 hours that day.

Unfortunately, he passed away in a motorcycle road accident in 1984 and was awarded the Arjuna Award in 2001. The wrestling ring at the IGI arena was named the ‘KD Jadhav stadium’ to honor him during the 2010 Commonwealth Games.