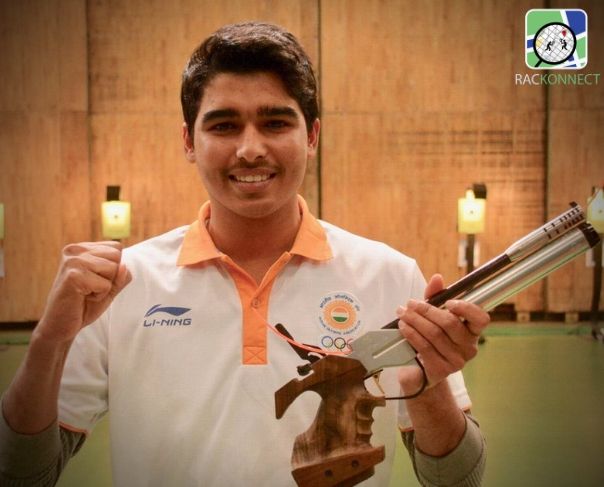 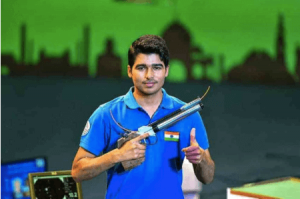 In 2004, Rajyawardhan Rathor rose to the prominence in Athens Olympics 2004. He grabbed the first-ever individual silver medal for the nation in the Olympics. Later, he became a sports minister for India. His achievement in the Olympics changed the shooting scene in the nation.

Saurabh grew up in a farmer’s family. Like most north Indians, he was introduced to Cricket. He and his sibling Nitin and used to play with toy guns. On one fortunate day, young Saurabh paid a visit to a nearby shooting range. He was 13. That day it was love at first sight. He started training in the complex the very next day.

His father Jagmohan Singh took his son’s call. He inspired his son to practice hard. Results were visible in 3-4 months. Saurabh started to befuddle everyone with his prowess. His coach Amit Sheron asked his father to purchase a gun for Saurabh. 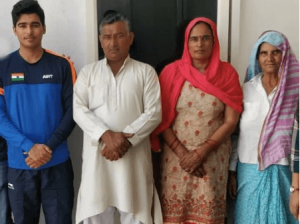 For a family with modest means, it was a daunting task. Nevertheless, his father took a loan for the emerging superstar of the family.

The supportive family created a shooting range in their home. It was between two opposite rooms. It provided him with a quiet space, something he didn’t get amidst the chaos at the academy. He focussed on the 10m air pistol and finally stuck to it. 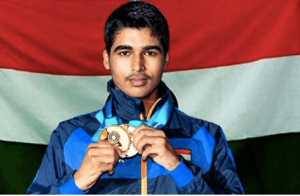 In 2017, he participated in his first World Junior Championship. It was held in Suhl, Germany. Saurabh finished just outside the medal bracket. 4th position inspired him to do better in the future.

In 2018, he announced his arrival. One after the other, his gold medal tally increased. The boy from Kalina village of Meerut (UP), became the youngest Gold medal winner for the nation at the Asian Games. He faced a strong challenge from 42-year-old Japanese, Tomoyuki Matsuda, and compatriot Abhishek Verma. The Japanese got silver and Abhishek finished third. 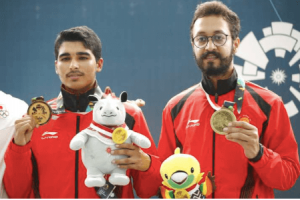 Success led to a wild celebration at his home.

The year 2019 began on a perfect note. In February, he won the gold medal at the ISSF World Cup in Delhi.

His partnership with fellow teenager Manu Bhaker began to hit the headlines. The combo won the gold medal at the mixed team 10m air pistol events at the 2019 shooting World Cup. The duo added two more gold medals at the ISSF World Cups in Beijing, Munich, and silver from Rio de Janeiro. He also broke the world and junior records in 10m pistol in Munich. 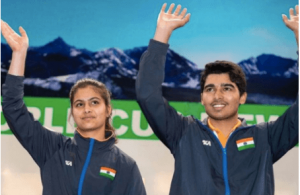 He was prepared to win the Gold medal at the 2020 Tokyo Olympics. Due to COVID-19, the games have been postponed. Saurabh Chaudhary was ready for the challenge. Saurabh is just 17. Most athletes tend to go downhill after an early success. Saurabh is defying the odds. His coach Amit Sheron is quite optimistic about his performance. Saurabh has at least 20 more years ahead of him. Surely, he can win many medals for the country in the coming years.