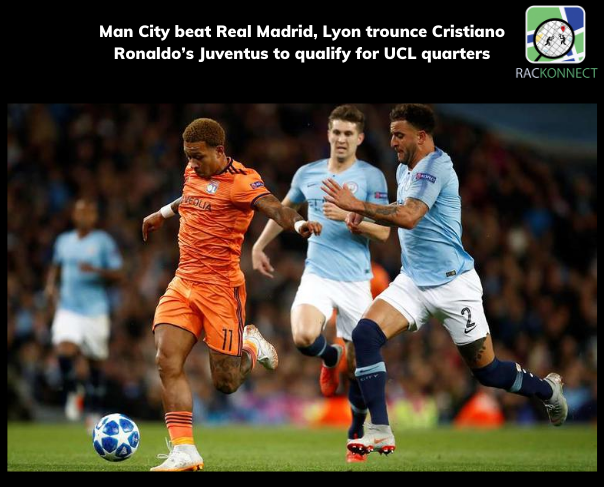 The roster for the first quarter-final of the Champions League is decided – Manchester City will take on Olympique Lyonnais after the two clubs defeated Real Madrid and Juventus respectively in the Round of 16 second leg.

Interesting, the quarter-finals is a one-legged match due to congestion of dates caused by the COVID-19 pandemic. Both teams will face each other at the Estadio Jose Alvalade (home of Sporting Clube de Portugal) on 16th August.

Manchester City defeated Real Madrid 2-1 in the second leg as Champions League resumed after almost six months to win 4-2 on aggregate against the La Liga champions. This is Zinedine Zidane’s first elimination from the competition, having won it three times in three attempts previously.

City’s intense pressing game forced Real Madrid to make several mistakes throughout the game, and both City goals game from errors from French defender Raphael Varane, who in particular, was unable to cope up with the constant pressing of Gabriel Jesus.

Jesus stole the ball from Varane to set up Raheem Sterling to tap in for the first goal in the 9th minute and then exploited another mistake from the 2018 World Cup winner to pounce to score City’s second goal. Karim Benzema’s 29th minute goal, a well-placed header, did not do much service at the end.

Meanwhile in Turin, an inspired Cristiano Ronaldo with a new haircut could not push Juventus beyond the line as his brace was not enough. Leading 1-0 from February’s first leg, the French side were handed a soft penalty which Memphis Depay converted in style in the 12th minute. This meant the Serie A champions needed to score three times to win the tie, and they could muster just two.

Lyon boss Rudi Garcia said, “We came up against an opponent who has an extraterrestrial in its squad,” of five-time Ballon d’Or winner Ronaldo.

“This is the victory of a group. We wanted to be in the final eight in Lisbon, we are there.

“We’ll still be outsiders and that suits us very well.”

Juventus are yet to win the Champions League since 1996, and with Sarri getting an expensive squad and failing to do the trick, he might be shown the door by the club management. Mauricio Pochettino is being rumored to be talking to the administration already. Sarri, however, downplayed the rumours.

“I don’t think directors of a top level will make a decision based on one match. They are going to evaluate the whole season,” Sarri said after the match.

“I find this kind of question [about his future] offensive, but not towards me, it’s offensive towards the directors. I have a contract, I’ll respect it and I don’t expect anything.”