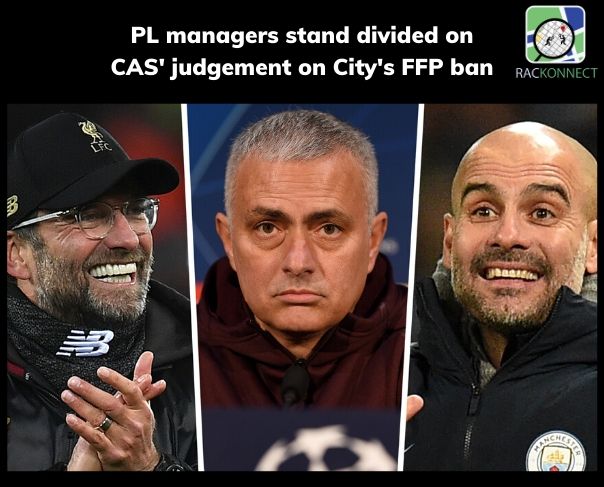 Manchester City’s 2-year ban from all continental competitions was turned down by Court of Arbitration of Sport (CAS) on Monday. The ban, imposed by FIFA, was annulled by the Court and the financial fine, too, was reduced. The decision was met with criticism and cynicism by some Premier League managers.

Spurs manager Jose Mourinho, prior to his team’s 3-1 victory over Newcastle United, said, ““In any case, it’s a disgraceful decision because if City are not guilty then they should not be punished with the fine. If you’re not guilty you shouldn’t have a fine. If they are guilty the decision is also a disgrace and they should be banned from the competition. I don’t know if City are guilty or not but either way, it’s a disgraceful decision.”

The former Manchester United and Chelsea manager also questioned the existence of FFP as it is not being used in the proper way. “I think this is going to be the end of Financial Fair Play because there is no point,” Mourinho said. “I would like to see it used in a proper way. At this moment we are talking about Man City but in the past, other clubs were in a similar situation.”

Liverpool manager Jurgen Klopp joined the bandwagon. The former Borussia Dortmund gaffer said, “”It’s not up to me to judge this and I don’t but I think this FFP framework we should stick to. I hope FFP stays just because it gives kind of borders that you can go to, but not over it, and that’s good for football.”

The German also feels that allowing City play the Champions League helps Liverpool in their process of retaining the Premier League next season, as City won’t be focusing only on the league. “They won’t have 10 or 12 games less now — no other team would have had a chance in the (Premier) league.”

Manchester City manager Pep Guardiola, however, had a opposite viewpoint on the situation. He said, “I’m incredibly happy for the decision. It shows everything that people said about the club was not true. We will defend on the pitch what we won on the pitch. We should be apologised to because if we did something wrong we will accept the decision from UEFA because we did something wrong.”

“We don’t expect Liverpool, Tottenham, Arsenal, Chelsea or Wolves to defend us but we have the right to defend ourselves when we believe what we have done is correct and three independent judges said this. Today is a good day, yesterday was a good day for football because we play by the same rules as all the clubs in Europe,” he continued.

“If we had broken FFP, we would have been banned but we have to defend ourselves because we were right. People said we were cheating and lying and the presumption of innocence was not there. When we were proved right we were incredibly happy because we can defend what we have done on the pitch.”

The war of words may not get translated on the pitch, as Liverpool have already lifted this year’s Premier League title. However, City are still in the Champions League while Liverpool were ousted by Atletico Madrid. City are also in hunt for the FA Cup, with Arsenal, Manchester United and Chelsea summing up the last four.

The history, origin and invention of football

NEED FOR SPEED IN FOOTBALL