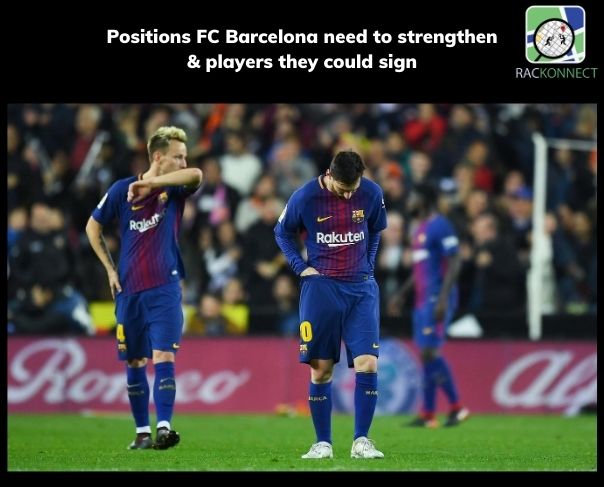 The arrival of Quique Setien was expected to solve a lot of problems at FC Barcelona, but the club still remains heavily dependent on the magic of Leo Messi to bail them out on several instances. The emergency signing of Martin Braithwaite, too, did not create the impact the club’s board would have expected.

The team also lost the La Liga to bitter rivals Real Madrid, who did not have the strongest squad themselves but topped the league with a dominating run in the last leg. The team is a good mix of young and experienced players, but still needs a little freshening up. We take a look at a few positions FC Barca need to strengthen and players that can help them.

This has been Barcelona’s Achilles heel since the departure of Dani Alves and even after the much-hyped arrival of Nelson Semedo, the problems persist time and again. There are days when Semedo is on top of his game, and there are some when he leaves a lot of space behind for opponents to exploit. Sergio Roberto has been more comfortable in the midfield.

Ricardo Pereira at Leicester City has had a terrific season (until he got injured) and looks ready to make the move to a better club. But looking at Brendan Rodgers’ ambitious project at the King Power Stadium, they club officials will have to shell out a lot of money to bring him to Nou Camp. Joao Cancelo can be an outside option, as he hasn’t been able to eke out a starting role at Manchester City.

Barcelona has a tradition of giving at least a centre-back to the Spain national team, but that trend seems to be under threat with an aging Gerard Pique. Samuel Umtiti’s injuries and inconsistencies haven’t helped the club either. Jean-Clair Todibo has looked good for Schalke 04 since joining in January on loan, but is still a couple of years away from being considered for the first team.

Napoli’s Kalidou Koulibaly has been in the market for the longest time now, and FC Barca could be one of the few step ups for the Senegalese. While he would be a costly option, Diego Carlos from Sevilla could be a cheaper option. Alessio Romagnoli, too, could be a leader at the back with age on his side.

Like his predecessors, Setien prefers to play three in the midfield with an orchestrator at the heart of things. Frenkie de Jong could replace the aging Sergio Busquets or could play beside Miralem Pjanic, but the midfield still needs dynamism, that has been provided by Ivan Rakitic and Arturo Vidal, both on the wrong side of 30. Thus, a speedy, creative player is the need of the hour, even more with the departure of Arthur to Juventus.

Marco Verratti would be a dream signing, but looks very unlikely. Fabian Ruiz could be looked upon, and so could Christian Eriksen with the lure of winning trophies. Both players are capable of creating opportunities but Barcelona could also be entrusting the job with an academy talent.

Leo Messi, even if he slows down a little, will be invaluable to the midfield. But not every other player is Leo, and certainly not Luis Suarez, with all of his holding ball-playing abilities. With Antoine Griezmann looking likely to operate down the right, the club needs to look at a top No. 9 to replace the Uruguayan. Martin Braithwaite looks unlikely to be able to weigh the responsibility.

The name that’s been heavily linked to Barça is Lautaro Martínez, given his South American flair and ability on the ball. Barca are also linked with a move for Neymar, but given the money involved, the move looks highly unlikely. Manchester United forward Anthony Martial, too, could be given a look-in, after the Frenchman impressed with his goal-scoring.

Abdelhak Nouri: Waking up from Coma and his role in Frenkie De Jong’s Barcelona transfer

Drills to improve dribbling in football