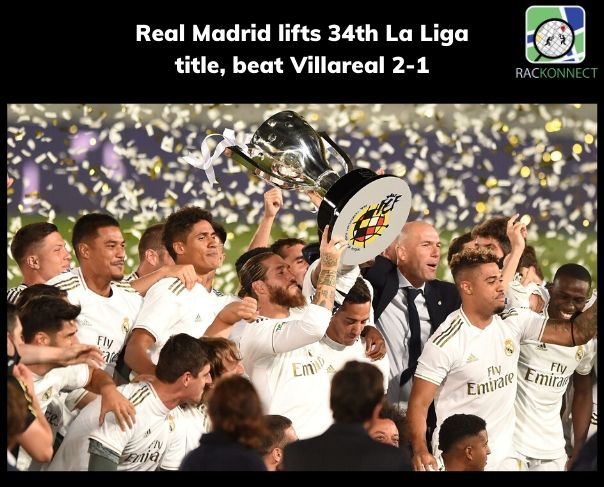 Spanish giants Real Madrid lifted their 34th La Liga title, a national record, with a 2-1 victory over Villareal and a game in hand. The Los Blancos were helped by a brace from Karim Benzema and while Vicente Iborra scored seven minutes from time, it was too little too late for the visitors to register more pressure on the home team.

Real Madrid has won all 10 of their matches since Spanish football restarted in June. They head into the final day of the season with an unassailable seven-point lead over second-placed Barcelona, who fell to a 2-1 defeat against Osasuna.

“This is better than anything. It takes a tremendous effort to win La Liga,” said Real Madrid boss Zinedine Zidane.

“After 38 matches, you have more points than anyone else. After lockdown and everything, it’s astonishing.”

“Today is one of the best days for me as a professional,” said Zidane. “After everything that happened, the three-month break, it is fantastic what has been achieved.”

This is Real Madrid’s third league title in the last nine seasons, a period that has seen them win four Champions League trophies. The Frenchman was in charge the last time Real won the league title and made it his aim to reclaim the title after returning midway through the last campaign – less than a year after his departure.

Captain Sergio Ramos credited his manager for the title.

“It has been a strange season but our objective was very clear once the league restarted,” said Ramos.

“We wanted to win every game. This is the reward for all our hard work. 34 leagues, my fifth title. Zidane has been key, he is the captain of the ship and led us from the start of the season – we have always felt protected with Zizou. He is a unique coach.”

Zidane, however, credited his players and praised them for some incredible football.

“The Champions League is the Champions League but La Liga makes me happier, because La Liga is what it’s all about. This is a tremendous feeling because what these players have done is incredible. I am lost for words because I am too emotional. The players are the ones who have fought for this. It’s true I’ve played my role but they are the ones who believe in what they are doing.

“It’s strange for everybody, we would have liked to have been with our fans at Cibeles but it’s not meant to be,” added Zidane, on the suspended team celebrations due to the outbreak of Coronavirus.

“But I’m sure everyone is happy in their homes tonight. The fans always love to see the team win and we’ve done this for them.”

England’s all time record goal-scorer Wayne Rooney: ‘I was not a natural goal-scorer’

Top goal-scoring defenders of all time