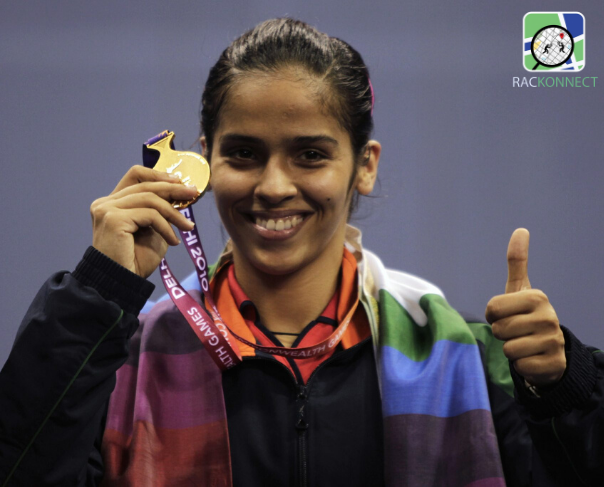 Saina Nehwal! That is one name everyone, from kids on the street to your local ‘chaiwalas’ to oldies who stay in your building, has heard of at some point.

Saina Nehwal’s contribution to badminton has seen a rise in the quality of badminton players that are emerging around the country.

2010 was the year Saina Nehwal absolutely ‘slayed’ in the Badminton world. It was that year that she clinched the gold medal at the highly reputed Commonwealth Games. Not only that, she even won 3 other major titles that year! Saina Nehwal rose to the occasion as she beat Mew Choo Wong of Malaysia in three long and tiring games.

She was a force one didn’t want to reckon with as she made her mark in Indian badminton. Saina didn’t just stand on the podium with gold around her neck, but she was the first Indian woman ever to do so.

In 2006, Saina Nehwal made her debut in the Commonwealth Games as a 15-year-old girl. In the mixed team event, she did manage to win her match, which, according to her, was a significant contribution. That year, India did land up winning the bronze medal in the badminton mixed team event.

Since Saina’s debut in 2006 games went well, she loved her journey, which gave her and her fans great hope for the future. It was believed by many that she had the potential and skills to win gold at the next commonwealth games.

For those who do not know, funnily enough, the 2010 commonwealth games concerning Saina Nehwal is quite an ironic one. New Delhi hosted the 2010 games, and it was Saina Nehwal who sincerely complained about the infrastructure built to host these games.

She told her the media that looking at the stadiums; she didn’t feel that India was prepared to host such a huge event. She went on to compare the Siri Fort stadium (where the games were held) to other stadiums she had been to, around the world and claimed, that it was not up to the mark at all.

Weirdly enough, that year’s gold medalist Saina Nehwal went on to retract her statement only a few moments later. She said that it was not right of her to say such things, specially since she is supposed to be the brand ambassador and is playing in front of her home crowd.
For those who didn’t catch a glimpse of Saina’s winning moment, here’s a chance to have a look at it: