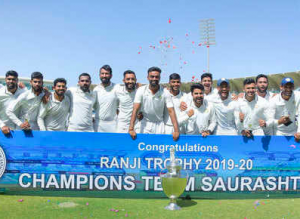 Three Gujarat teams competed in the Ranji Trophy. Apart from the state team, Baroda and Saurashtra were the other two. The game is very popular in the Saurashtra region. On Friday, the 13th of March 2020, the Saurashtra Cricket Stadium witnessed its greatest domestic success.

It was the maiden success of Saurashtra in the most coveted trophy of domestic cricket. They were competing in an 84-year-old tournament from 1950-51. They remained in obscurity for many years.

With the turn of the decade, they rose in status. The team played 3 finals in 2012-13, 2015-16 and 2018-19. They lost the first two to mighty Mumbai and the last one to Vidharbha. Finally, they lifted the title in their fourth appearance.

At Rajkot, they hosted Bengal. The Hosts got a solid start. Avi Barot and Vishvaraj Jadeja slammed half-centuries. Saurashtra lost quick wickets and their edge came to a halt.

Arpit Vasavada and Chateshwar Pujara held the rocking ship. Arpit faced 287 deliveries in hot conditions. Pujara retired injured due to dehydration. Later, he played a patient inning. He faced 237 balls for his 66. After the sixth wicket dismissal (Arpit), Saurashtra could add only 77 runs to scorecard. Arpit hit the only century of the final (106). They ended first innings with a score of 425 all out. Akashdeep took 4 wickets for Bengal. 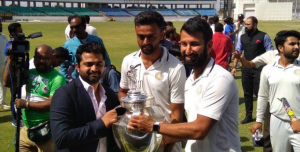 Bengal faltered at the beginning. At the score of 35, they lost both openers within 8 balls. Sudip Chatterjee exhibited a good fight. He remained on the crease for 241 deliveries. With Manoj Tiwary and wicketkeeper Wriddhiman Saha, he carried the score to 225. He was dismissed at this point. Saha and Anustup Majumdar posted half-centuries. The valiant fight could not last long. The last 4 wickets of the Bengal team could add only 20 runs. They finished the first essay on 381 in 161 over. It fell short by 44 runs in terms of a first-innings lead. Lanky left-arm seamer Jaydev Unadkat displayed exemplary leadership. He took 2 important wickets for 96 runs. Dharmendrasinh was the best bowler. His figure was 52-14-114-3.

The game was heading towards a draw. Saurashtra’s second inning finished with 105/3 at the stumps of the fifth day. Avi again inspired us with 39 runs. Shahbaz dealt 2 blows but that was not enough. The game ended in a draw. Saurashtra won on the basis of gaining the first-innings lead. Social media was flooded with congratulatory messages.

Once, Rajkumar college of Rajkot was called Eton of the east. Ranjitsinhji ‘The Maharaja of Indian Cricket’ belonged to this place. His nephew Duleepsinhji played for England (he refused to play for India). 61000 square kilometers area has produced cricketers for three countries. Hanif Mohammad and his brothers were raised in Porbandar. Later they moved to Karachi. Amar Singh, Vinoo Mankad, Chatehwar Pujara and Ravindra Jadeja are torchbearers of the Kathiawadi tradition. That’s why this triumph is sweet in many senses. After rolling for countless years, the Ranji trophy has finally reached its spiritual home.