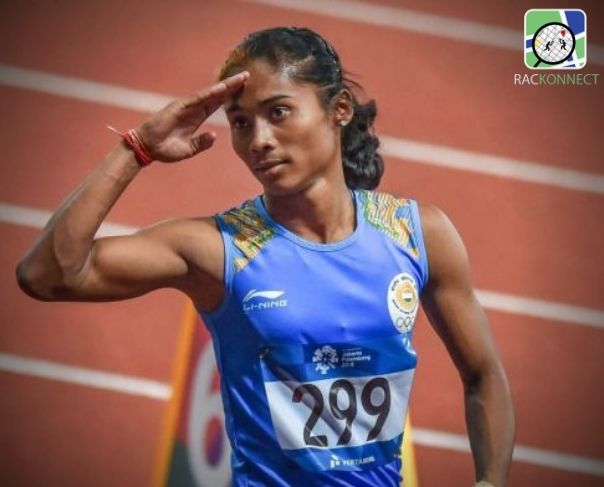 19-year-old, Hima Das, also known as the Dhing Express is an Indian sprinter from Assam who has broken many national records. However, her journey to success is one a kind. Born to a farmer’s family, she was the youngest of her four siblings, and her father was her first coach. She began sprinting bare feet through paddy fields as her village did not have a proper running track and also helped her father on the farm in the evenings.

Initially, she was interested in playing football but later changed her path after a piece of advice from her physical instructor. Also, she did not see a bright future in women’s football. She won her first gold medal in 100m sprint when she was just 13 years old. From 2014 to 2016, she trained under the Nagaon Sports Association, where Gowri Shankar Roy was in charge of the athletics wing. Hima’s parents couldn’t always afford the travel from their village to Nagaon, but Roy always stepped in to help. 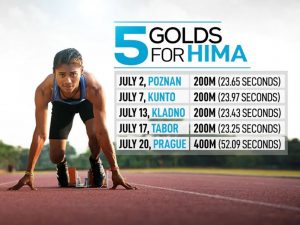 In 2017, she shifted to Guwahati under the guidance of Nipon Das. In 2018, when she was used to running 100m and 200m was told to switch to 400m. It was in the same year that the 18-year-old went passed all odds to break many national records.

After winning the 400m race in the Federation Cup, she qualified for the 2018 commonwealth Games in Gold Coast, Australia, in the 400m and 4*400m relay. In her very first International event, she clocked her personal best of 51.32 seconds to finish sixth. However, something exceptional was incoming. At the 400m event in the World U-20 Championships, in Tampere, Finland, she won a Gold with a timing of 51.46 seconds and became the first-ever Indian athlete to win a gold medal at an international track event.

Later, she broke the National record at the 2018 Asian Games clocking 51 seconds, and eventually qualified for the 400m category finals. The gold at the World Championships was followed by a silver in 400m individual event, gold in 4×100 women’s relay race, and another gold in the mixed relay category, held for the first time at the Asian Games. In the finals of her 400m event, she broke her previous record of 51 seconds clocking a time of 50.79 seconds.

With 4 International medals in a year, the government conferred her with an Arjuna Award. Hima Das had shaken the Indian Athletics picture by then. Das continued her success in 2019 by winning the 200m Gold in Poznan Athletics Grand Prix in Poland in 23.65 seconds. A week later, she won 200m gold at the Kladno Athletics Meet in the Czech Republic with a time of 23.43 seconds. Within a week, she won her fifth gold medal in 400m event in Nove Mesto, completing the race in 52.09 seconds.

She was selected for the World Championships in Doha but ruled out due to back injury. The 19-year-old has now shifted from 400m to 200m category and looks forward to focusing on the speed and endurance of the sport. Her best timing is 23.10 seconds which was clocked in mid-2018 but the qualification for the Olympics in this category is set at 22.80 seconds. The postponement of the Olympics is a blessing in disguise for the youngster as she now has time to train accordingly.