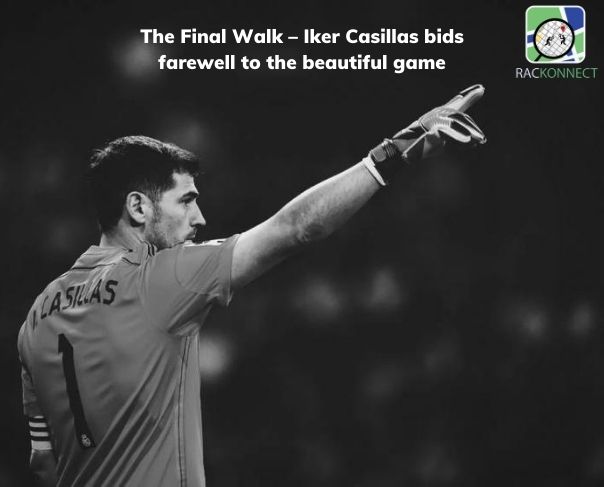 Former Real Madrid and Spain captain Iker Casillas has hung his boots at the age of 39. The goalkeeper is regarded as one of the finest of all-time, winning the World Cup in 2010. Casillas also led La Roja to two European Championships that sandwiched the World Cup title, in 2008 and 2012.

Part of arguably the best football team internationally, Saint Iker, as he was fondly called, was a flag of consistency and pride for the Spain National Team. He played 167 times for the national team, making his debut in June 2000 against Sweden. The match ended in a 1-1 draw. In the next game, he stopped Luxembourg from scoring a goal, helping Spain win the match 1-0.

At the club level, Iker had a long journey with Real Madrid and was a fan favourite for most of his journey. He rose through the club ranks, making his debut in 1999. Facing Olympiakos on 15 September 1999, he became the youngest goalkeeper ever to feature in the UEFA Champions League at the time, aged 18 years and 177 days. (His record was later broken by Mile Svilar in October 2017)

In May 2000, he became the youngest-ever custodian to play in and win a Champions League final when Real Madrid defeated Spanish rivals Valencia 3–0, four days after his 19th birthday. Casillas had suffered a heart attack during a training session in 2019 and had not played any competitive football since April 2019.

He has 59 clean sheets in 174 games, the highest in the history of the UEFA Champions League. His run of 433 minutes without conceding a goal at the 2010 World Cup is historic, and a national record as well. Only Leo Messi has won La Liga matches that Iker’s 334, a feat he garnered in 510 outings. He’s Real Madrid’s second most appearance maker with 725.

“The important thing is the path you travel and the people who accompany you, not where it takes you, because that comes with work and effort alone, and I think I can say, without hesitation, that the path I have taken is the one I dreamt about #Thanks,” Casillas said on Twitter.

He has been playing for Porto since 2015, winning the Portuguese League in 2017-18 and 2018-19. He was given a role in FC Porto’s support staff last season and was also included in the squad, but did not make it to the match day squad. Known for pulling off breath-taking saves, Saint Iker will happily bid farewell to the game he won everything in he played for.

The gem of Indian Football, Chuni Goswami passes away

Importance of muscle memory in football

Special Brazilian talents who failed to fulfil their potential