Home > Cricket > This Day, That Year: When India beat England to clinch the 2013 Champions Trophy 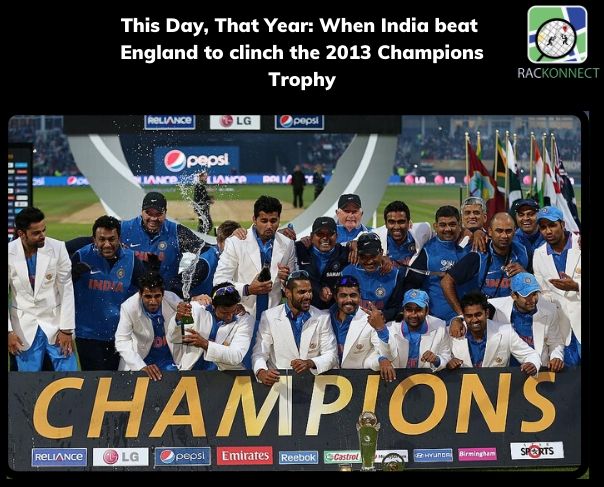 India had played a fearless brand of cricket throughout the tournament and were unbeaten on their way to the final. Openers Shikhar Dhawan and Rohit Sharma were the new opening partnership that had given India some fantastic starts. Bhuvneshwar Kumar and Umesh Yadav were handy in the swinging conditions in England. England were also unbeaten on their way to the final and it promised to be a cracker of a game at Edgebaston. But rain played spoilsport and the game was reduced to 20 overs a side.

With two new balls from both ends and overcast weather, England skipper Alastair Cook decided to put India into bat. India began cautiously but lost Rohit Sharma early as he was cleaned up by Stuart Broad. Shikhar Dhawan and Virat Kohli then began to consolidate the Indian innings and tried to string a partnership. With the score crossed 50 and 8 overs already been bowled, Dhawan tried to up the ante and in that process lost his wicket. India then collapsed from 64-2 to 66-5 with Suresh Raina, Dinesh Karthik, and MS Dhoni all back in the pavilion.

An important partnership was required as Virat Kohli kept one end of the wicket intact and tried to keep the scoreboard ticking. He found an able ally in Ravindra Jadeja and the duo began to score runs at a relatively quicker pace. They both added a crucial 47 runs for the sixth wicket before Virat Kohli was out for 43. Some late hitting from Jadeja ensured that India ended up on 129-7 and the bowlers had something to defend.

Needing only 130 runs from 20 overs, England needed a cautious start while India needed to make the new ball count. And so they did as Alastair Cook was sent packing for just 2 runs. India kept things tight and did not let England run away with the chase. The Indian spinners then spun a web as England were reduced to 4-46 in no time and it was all down to Eoin Morgan and Ravi Bopara to try to steady the English ship.

The duo was cautious at the beginning but as time passed, they gradually got more confident with their stroke-making and began to put bad balls to the boundary. Both added 64 runs for the fifth wicket and were absolutely running away with the game when Ishant Sharma produced a moment of magic. Ishant’s slower ball outside off was hit by Morgan straight into the hands of short mid-wicket. The very next ball, Ravi Bopara hooked a bouncer from Ishant straight into the hands of short square leg. India now had all the momentum as it was difficult for the two new batsmen at the crease to adjust to the conditions. Jos Buttler was cleaned up by Jadeja while Tim Bresnan’s calamitous run-out meant that the match went down to the final over with England needing 12 runs to win the game. In the end, England needed 6 off the last ball and Ashwin looped the delivery outside off. But James Tredwell missed the ball altogether and India won the game by 5 runs, winning their maiden Champions Trophy.

Indian pace-bowling in One-Day Internationals: How far have they come?