Home > Cricket > This Day, That Year: When India beat West Indies to win the 1983 World Cup 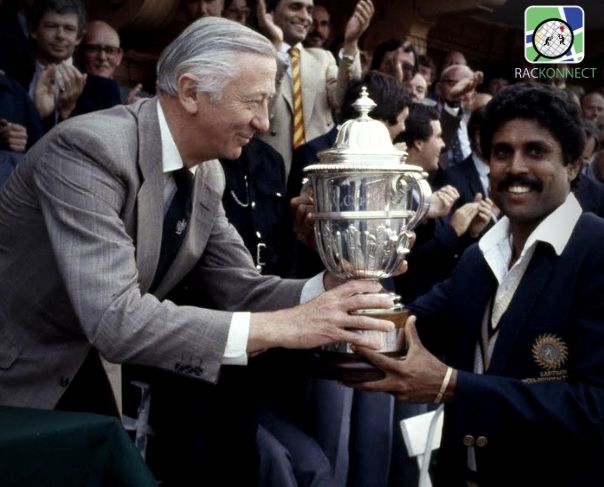 On 25th June 1983, India managed to do the unthinkable, beating defending champions West Indies in the final to clinch their maiden World Cup title under the leadership of the great Kapil Dev. India were bowled out for a mere 183 while batting first and it seemed a target well within the reach of the mighty West Indies who boasted the likes of Sir Vivian Richards in their batting order. But an inspired bowling performance from the Indians saw the mighty West Indies bowed out for just 140, handing India a comprehensive win by 43 runs.

On a green top at Lords’, India were asked to bat first by West Indies skipper Clive LLoyd. West Indies took advantage of the conditions as they got the big fish Sunil Gavaskar out with the score just 2 runs. Kris Srikkanth and Mohinder Amarnath then tried to settle the Indian ship and added a crucial 57 runs for the second wicket. Amarnath’s wicket triggered an Indian batting collapse as from 90-2 India slumped to 111-6. Some crucial runs from Sandeep Patil along with the tailenders ensured that India reached 183 before getting bowled out and gave their bowlers something to bowl to.

In reply, West Indies needed a couple of steady partnerships to settle the chase while India needed early wickets. India struck early when Gordon Greenidge was bowled by Balvinder Singh Sandhu. But then Sir Vivian Richards came to the crease and began to take the game by the scruff of its neck. Hitting the ball beautifully, Sir Vivian Richards raced on to 33. This is when Kapil Dev produced a game-changing moment. Richards tried to smash Madan Lal over mid wicket but could only get the elevation and not the distance as Kapil Dev ran behind and took a fantastic catch, which absolutely changed the fate of the game.

Indian bowlers became more and more confident with the fall of each wicket. At 6-76, the game looked to be in India’s favour. But then again Jeff Dujon and Malcolm Marshall added a crucial 43 runs for the seventh wicket. That did not last any further as the Indian bowlers were right on the money. In the end, Mohinder Amarnath trapped Michael Holding right in front to complete a famous win over the West Indies. It was one of the brightest days in the history of Indian cricket and changed the way the game was viewed in India. One of the main reasons why cricket is followed religiously in India is because of this famous win which changed the landscape of Indian cricket.

5 Players who have played for most number of ISL Clubs