Home > Cricket > This Day, That Year: When Kapil Dev’s blazing 175 turned the tide for Indian Cricket 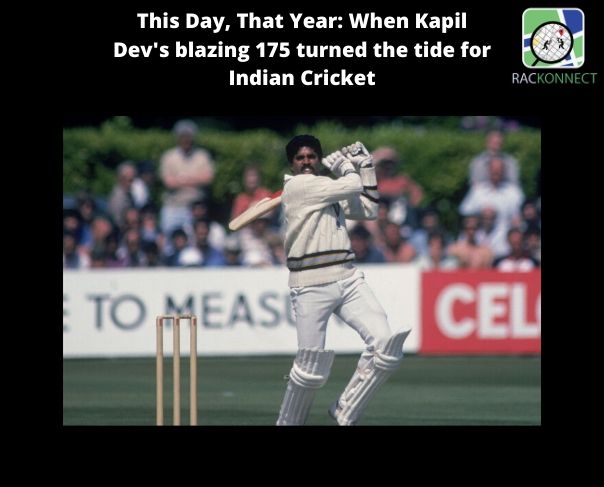 This Day, That Year: When Kapil Dev’s blazing 175 turned the tide for Indian Cricket

The 1983 World Cup is remembered for India’s finest victories against the West Indies against all odds both in the group stage and in the final. But it is also special for one more classic inning which unfortunately had no television coverage. This was the inning that probably changed the fate of Indian cricket for years to come. Had this inning not been played, cricket might have never become the sport that it is today in India. All the credit for that special inning goes to the then Indian skipper Kapil Dev.

India faced Zimbabwe in a must-win game at the 1983 World Cup before their semifinal clash against England. Batting first, India got off to the worst possible start as the Zimbabwe bowlers Peter Rawson and Kevin Curran were all over the Indian batting line-up like a rash. All great names like Sunil Gavaskar, K Srikkanth, Mohinder Amarnath, Sandip Patil and Yashpal Sharma were back in the hut and India were in very deep trouble. No one was able to reach into double figures and the openers were not even able to open their account. This was the time when the gamechanger Kapil Dev walked in for India at 17-5.

In the beginning, Kapil Dev tried to consolidate the Indian innings due to the partnerships with fellow all-rounders Roger Binny and Madan Lal. Kapil Dev and Binny added 60 runs for the sixth wicket and Kapil and Madan added 62 runs for the seventh wicket, taking India towards a total where the bowlers could have something to bowl to. But it was the partnership with wicketkeeper Syed Kirmani where Kapil Dev absolutely smashed the Zimbabwe bowlers to all parts of the ground. Kapil Dev scored 175 runs in just 138 balls including 16 fours and 6 sixes and remained unbeaten in the end. It was his heroic effort that helped India reach 266-8 at the end of their innings, something which looked impossible at one stage when they were 17-5.

In reply, Zimbabwe were bowled out for just 235 and India comfortably wrapped up the game, booking their place in the semifinal versus England. We all know what happened next as India went on to win the World Cup against all odds. But it was the heroics of Kapil Dev that helped India trace the path of World Cup glory and it will always be one of the best innings ever played in the World Cup.