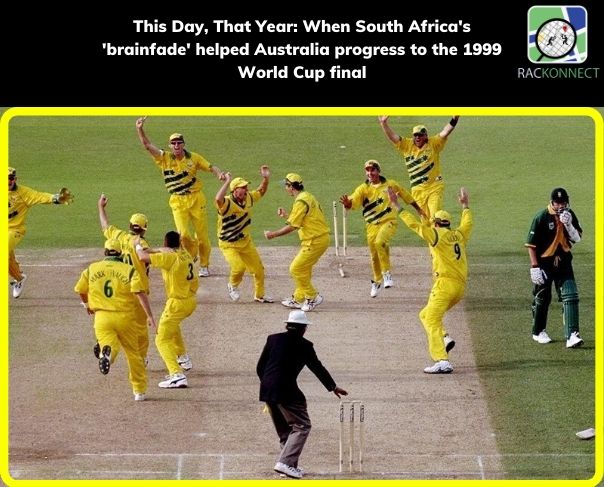 It was on 17th June 1999 that the famous semifinal between South Africa and Australia was tied and Australia progressed to the world cup final on superior net run-rate. The game was there to be taken by South Africa, but some horrendous running from Lance Klusener triggered a run-out and brought about the downfall of South Africa’s chances of making it to the final.

Australia batted first and got off to a horrible start as they lost Mark Waugh in the very first over. Ricky Ponting and Adam Gilchrist then tried to stabilize the Australian innings and added 54 runs for the second wicket. Both got starts but fell in quick succession. It was again up to their skipper Steve Waugh to bail them out of the situation. He had already done that once against South Africa in the same tournament. Steve Waugh and Michael Bevan added crucial 90 runs for the fifth wicket and Waugh made a captain’s contribution by scoring 55 important runs. Michael Bevan got some support from Shane Warne but the tail of Australia failed to wag and the South African bowlers were on top for the entirety of the innings. Bevan scored 65 and Australia could only post 213 before getting bowled out. Shaun Pollock was the pick of the South African bowlers with figures of 5/36.

Needing 214 to win, Australia needed quick wickets to stay in the game. Gary Kirsten and Herschelle Gibbs helped South Africa get off to a cautious start, adding 48 runs for the first wicket. But then Shane Warne was introduced in the attack and that completely changed the game on its head. Warne took crucial wickets of both the openers and skipper Hansie Cronje while another run-out made it 61-4. South Africa desperately needed a partnership to consolidate their innings and that partnership was formed between Jaques Kallis and Jonty Rhodes. The duo carefully negotiated the Australian bowling and slowly but surely kept the scoreboard ticking. The duo added 84 runs for the fifth wicket and till the time they were there at the crease, the Proteas looked to be in the drivers seat.

As soon as the partnership was broken, South Africa began to lose wickets at regular intervals and the game began to go right down to the wire. Lance Klusener was keeping one end of the scoreboard ticking but was running out of partners at the other end. It all came down to the last over when 9 runs were required and Damien Fleming had the ball. Klusener smashed two boundaries off the first two balls to make the equation 1 from 4. But the problem was that the Proteas had only one wicket in hand. The next ball was a dot ball and the pressure began to mount on Klusener. So the next ball, he just hit it straight and began to run towards the non-striker’s end but the non-striker Alan Donald had his eyes all the time on the ball. Amidst all the confusion, Damien fleming threw the ball towards Adam Gilchrist who took off the bails at the striker’s end and the game was tied. Since Australia had a better net run-rate they progressed to the final and it was a very heart-breaking loss for the Proteas.

Having 3 balls to score that 1 run and yet not being able to score that run is something that might haunt Lance Klusener for the rest of his life. But this is what cricket is all about. It is about who handles the pressure well in the end.