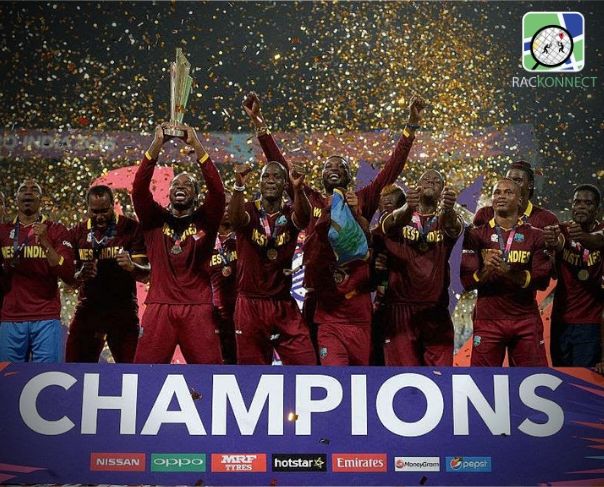 “Carlos Brathwaite! Remember the name!” were the words of Ian Bishop, as the West Indies team came running on to the field to celebrate their second T20 World Cup triumph. On this day, 4 years ago, the T20 World Cup final witnessed a last-over thriller in which Carlos Brathwaite held his nerve to break the English hearts and take the cup back to the Caribbean islands.

England batted first in the final but got off to a horrible start as Samuel Badri cleaned up Jason Roy for a duck. England also lost the wickets of in-form Alex Hales and skipper Eoin Morgan and were in deep trouble at 23-3. This is when Joe Root and Jos Buttler got together and tried to consolidate the England innings. After adding 61 runs to the fourth wicket, England again suffered a huge blow as Jos Buttler perished. Although wickets kept falling at the opposite end, Joe Root tried to keep the scoreboard ticking a scored a well-made half-century (54 off 36 balls). A late cameo of 21 from David Willey ensured that England had something to bowl at with a competitive score of 155-9.

Chasing 159 to win, even West Indies got off to a poor start as they lost both their openers Johnson Charles and Chris Gayle in the second over. The departure of Lendl Simmons pushed the West Indies further into the deep hole as they were already three down for just 11 runs. But Marlon Samuels, who had played an important knock in the final of their 2012 T20 World Cup triumph, was still at the crease.

Samuels and Dwayne Bravo strung a crucial partnership of 75 in which the former did the bulk of the scoring and stabilized the West Indies’ innings. But again West Indies lost their way as they kept on losing wickets at regular intervals. Samuels was scoring at one end and brought up an important half-century. But West Indies almost seemed to have ran out of steam at 107-6 when skipper Darren Sammy was dismissed. With 48 runs required of 26 balls, Carlos Brathwaite joined Samuels at the crease and the duo took the game deep into the last over.

With 19 runs required off the last over, the bowling team was in the driver’s seat. However, Ben Stokes was hit for four sixes of the first four balls of the over by Brathwaite which helped West Indies complete an unlikely victory. They became the first team to win the T20 World Cup twice and did so in dramatic fashion. Samuels ended up unbeaten on 85 off 66 balls while Brathwaite played a blinder scoring 34 runs off just 10 balls. While Ben Stokes was distraught and in tears, the West Indies side defied all the odds and showed why they were the kings of the shortest format of the game.

Cricket Strategies one should learn