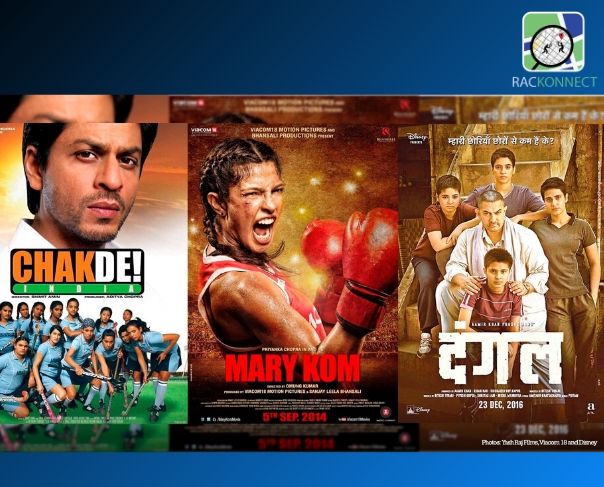 All sports events globally have been stopped since the outbreak of the COVID-19 pandemic. This has had a massive effect on the fans in India, who are now in self-isolation (ideally), or do not have their favourite shows running live on television. Here, we bring you a list of sports movies that’ll bring an adrenaline rush to you.

It rarely happens that Farhan Akhtar acts in a movie and does not direct or produce it. This is one of the gems, and luckily, it turned out to be a masterpiece. Covering ace Indian athlete Milkha Singh’s story, Rakesh Omprakash Mehra beautifully layers the script, intertwining the Partition, Milkha’s inner battles and more.

Incidentally, this wrestling saga went on to become the highest grossing Bollywood movie of all time, featuring the tremendous Aamir Khan. Inspired by the story of Mahavir Singh Phogat and how he transformed his daughters into world-class wrestlers, Dangal handled a serious theme with light-heartedness and that too, very smartly. Director Nitesh Tiwari deserves all the credit.

The first fiction on this list, Chak De India was one of the flag-bearers of sports movies in the country, and was of top-notch quality. It moves you until the end, and Shahrukh Khan, along with the 16-odd hockey players, gives a note-worthy performance. The name of the movie has become a national anthem whenever the Indian logo is performing at any global stage, and we can only than Shimit Amin for the same.

If you saw Shreyas Talpade’s memorable debut, you expected him to do big things. Sadly enough, not everyone is Nagesh Kukunoor. A mute and deaf wannabe cricketer’s struggle to the top is every second Indian’s story, and is as relatable as anything. Adorned by the legendary Naseeruddin Shah as his coach, Iqbal gives you hopes, aspirations and tears of joy at the same time.

You make a film list and don’t include Salman Khan in it? Sorry, we ain’t taking panga with the bhai of Bollywood! Sultan is a seamless watch, and continues to twist and turn until the final scene. Featuring Anushka Sharma and Randeep Hooda in key roles, Sultan celebrates Haryana, the soil and has love at the core of its subject. A flick for a lazy Sunday afternoon, surely.

Soumendra Padhi’s honest attempt to bring to light marathon runner Budhia Singh’s story was a commendable one. Budhia became a national sensation after becoming the record-holder for being the world’s youngest marathon runner. The film did not receive the adulation in deserved, but now is the time to make the most of it. Go ahead and watch this one and tick it off your bucket list.

There are lives of people and then there’s life of Mary Kom. She’s an inspiration and a living legend, having defied more odds than most people. Despite her father’s approval, Mary continues to box and goes on to become one of the best boxers in the world. Player by the versatile Priyanka Chopra, Mary looked real and believable and that struck a chord. It was a deserved debut for Omung Kumar as a director.

Arguably the best movie on a single cricketer’s story, M S Dhoni – The Untold Story was a breakout for Neeraj Pandey, given his penchant for real-life thriller involving defence or social stories. This was personal, and it did have that extra touch. The effortless mixing of mixing MS Dhoni’s personal and professional lives was a difficult job, but who better than Pandey to pull off such a operation? Tagging Sushant Singh Rajput along, he delivered and how! M S Dhoni still remains one of the best movies on cricketing dreams, hope and India.

Ashutosh Gowarikar’s masterpiece, Lagaan, has everything. A very powerful script, strong performers, dynamic music and a terrific expressionist in Aamir Khan, Lagaan had the entire recipe to become a hit, and so it did. The film told the story of a group of villagers take on the Britishers in a game of cricketer in colonial India, and the intricacies of such a battle. This movie is a must-watch, even on repeat mode, if you’re in the mood of revolution.

You may not have heard of this man, or his story, but you need to. A film that solely relies on performances, Paan Singh Tomar hits the ball out of the park with Nawazuddin Siddique and Irrfan Khan. Khan leads the pack, showing speed and pain effortlessly. This film won critics, fans and awards galore all around the country and is a masterpiece.

Did we miss out your favourite? Leave it in the comments’ section.