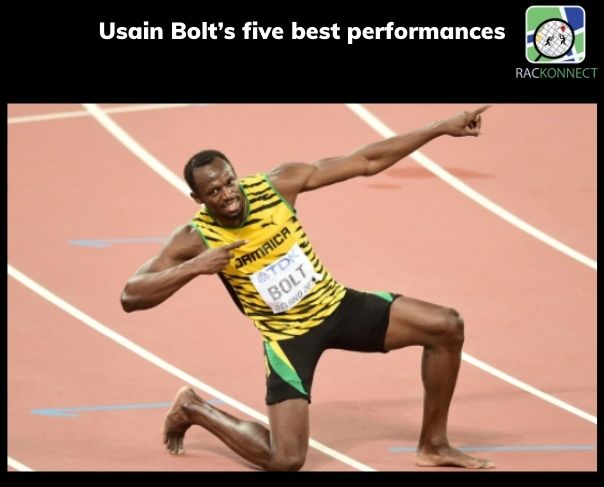 Usain Bolt, also known as Lightening bolt is undoubtedly the greatest sprinter of all times. From 2008 to 2016, the Jamaican won a tally of 20 Olympic and World Championship Gold medals. He is not only the first one to achieve this feat but has also set a benchmark for other Worldwide sprinters.

Let’s take a look at the five best moments of his career.

After an early elimination at the 2004 Athens Olympics due to a below-par run at the 200m heats, the Jamaican came back stronger to avenge the loss.

The tall sprinter claimed an Olympic sprint double in the 100m and 200m category. He broke his 100m record with 9.69 seconds. Then came the second World record when the Jamaican clocked 19.30 seconds in the 200m category to win his second gold. The third gold came in the 4*100m category when Bolt and his team clocked 37.10 seconds between them. The team broke the previous record by one-tenth of a second.

Three Olympic gold medals and three World Records made him the star of the Beijing Olympics.

Bolt arrived at the 2012 Olympics, with his eyes firmly set at the Gold medal. He won the 100m gold medal with a time of 9.63 seconds and retained his title from the 2008 Olympics. He thereby became the second athlete after Carl Lewis to defend the Olympic crown.

In 2014, Bolt was out of action for several months due to an injury. He came back at the Commonwealth Games and competed only in the 4*100m relay and along with his team, he won the relay in 37.58 seconds- again a Commonwealth Record. With this performance, Bolt had again shown that he is the fastest man on the planet.

At the Rio Olympics, Bolt convincingly won the 100m Olympic gold medal clocking a time of 9.81 seconds. Moreover, he became the first athlete to win three times at the Olympics Games.

He added another gold in the 4*100m relay, taking his tally to Olympic medals to eight.

Usain Bolt retired after the 2017 IAAF World Championships due to a hamstring injury, ending his career on a sad note. However, his legacy will inspire and be followed by many for years to come.