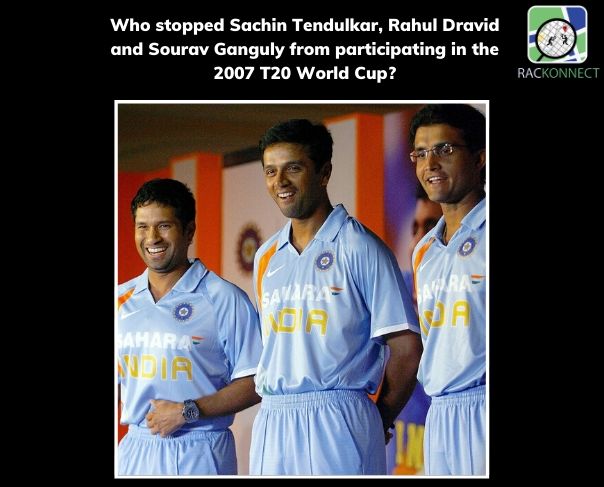 The entire world was shocked when three of the top batsmen in the world decided to not participate in the first-ever T20 World Cup played in 2007. Indian troika of Sachin Tendulkar, Rahul Dravid and Sourav Ganguly decided to give the tournament a miss to allow youngsters, the ‘Gen Next’, a shot.

But what or who stopped them? The then team manager Lalchand Rajput has revealed.

“Yes, it is true (Rahul Dravid stopping Sachin Tendulkar and Sourav Ganguly from playing the 2007 T20 World Cup). Rahul Dravid was the captain in England and some players came directly from England to Johannesburg (for the T20 World Cup) so they said let’s give an opportunity to the youngsters,” Rajput told Sportskeeda.

“But after winning the World Cup they must have repented it because Sachin always kept on telling me that I am playing for so many years and I have still not won the World Cup,” Rajput revealed.

Sachin went on to win the 2011 World Cup that was hosted by India, Sri Lanka and Bangladesh, helping his country become the first nation to win the Cricket World Cup on home soil. The veteran batsman was the official ambassador of the tournament and was also the second highest run-getter, only 18 runs behind Sri Lanka’s Tillakaratne Dilshan.

Mahendra Singh Dhoni had led a young Indian side to the World Cup, returning with the trophy after defeating Pakistan in a nail-biting finale. The tournament and the victory redefined the contours of Indian cricket in ways more than one. It pushed Indian cricket to focus towards blooding youth talents better and made fielding one of the priorities, which was sporadic until then.

That was helped by Dhoni’s tacit captaincy, under who India became the World No. 1 team in Test cricket and won the T20 and ODI World Cups.

Recalling Dhoni’s leadership skills, he said, “To be honest, he was very very calm. He used to think two steps ahead because a captain has to make a decision on the ground… One thing I liked about him was that he was a thinking captain.”

“He seemed to me like a mixture of [Sourav] Ganguly and Rahul Dravid… Ganguly was very very aggressive and thinking but was positive and thinking,” he added.

Lionel Messi breaches the 700-goal mark, but who are the six ahead of him?